'roest' [rust] is a piece in which the choreographer would like to show two bodies confronted to a machine. by using this machine he wants to explore the possible physical borders of the human body, and to push them further.  the machine will manipulate the body that it contains, will try to push it in all sort of shapes, but is conducted itself by a second body.  the focus is on the relation between the two bodies, one manipulating the other; the questions that arise are following: can we possess someone else's body, what are the consequences of a complete dependence on the decisions someone else makes, when does a body loses its function of body and what happens if we consider it as an object, how do we react if things go terribly wrong?
'roest' is a story of two bodies connected and abused by a stone cold machine. two bodies trapped in a spiral of continuous decay, trying to liberate themselves of their rusted minds.  the inspiration for 'roest' [rust] can be found in the freak show, where people thread human bodies in a very object oriented way, where people often are exhibited and manipulated against their own will.  important is this dark atmosphere of the freak show, not the spectacular-painful.  for the creation of the machine ugo found inspiration in the ''machine célibataire''. this is a term, originally used by marcel duchamp for his le grand verre, for a collection of often unreal or imaginary machines, in which certain contrasts have an important role: the male vs. the female, sexual vs. mechanical, life vs. death. (ugo) 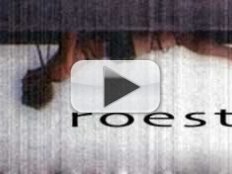